£13,385 given to Charity by Middlesbrough Freemasons. 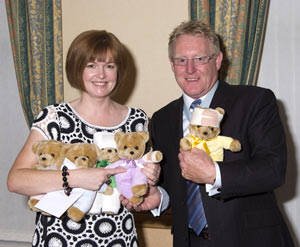 At their seventh Annual Charity Presentation evening held on Thursday 15th May 2008, at the Masonic Hall, Middlesbrough, the Freemasons of Middlesbrough and the Zetland Ladies Club (a club for the wives/partners or widows of Middlesbrough Freemasons) presented £13,385 to various local and some regional/national charities. (The total given since this event was started has now reached £80,000).

The money had been raised locally during the last twelve months by Freemasons, their wives/partners, families and friends at events such as social evenings, sponsored walks etc, and from donations by the Freemasons themselves
Representatives from 24 invited Charities, together with their partners and colleagues attended the evening to receive the donations. The representatives were entertained by Freemasons from the specific Lodge(s) who were making a donation to their Charity. 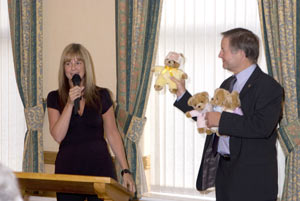 The evening followed its usual format, with drinks on arrival before a meal was served. There were then short presentations by a representative of the Daisy Chain Charity and Nurses from the Accident and Emergency Department of the James Cook Hospital on the Freemasons ‘Teddies for Loving care’ initiative. (Teddy Bears, purchased with money donated by Freemasons, are presented to Hospitals. They are then given to children attending the Hospital if they are in a distressed state. The children are allowed to keep the Teddy Bears when leaving the Hospital.)

Cheques and a Lap Top Computer were then presented to the Charity Representatives. A cheque was also presented to the APGM, Worshipful Brother Alan Brundall for the P. G. M.’s Air Ambulance Appeal.
The formal Part of the evening was brought to a close by the Assistant Provincial Grand Master, for Yorkshire North and East Ridings, Worshipful Brother Alan Brundall, who thanked everyone for attending and hoped they had learnt a little more about the work of Freemasons. He also said that he was extremely grateful to Worshipful Brother Jim Skelton who had organised the evening on behalf of the Middlesbrough Lodges.