Freemasons and the North Riding Infirmary 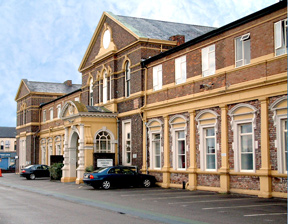 The North Riding Infirmary was a fine-looking building and for over 140 years it had been well used and admired by people of Middlesbrough and people from the surrounding area. It was felt locally that this building was worthy of preservation as it has a very special link with the history of the Middlesbrough area, but it was not to be as it was demolished in 2008 to make way for another supermarket.

The laying of the foundation stone took place on the 7th August 1860 and it was a very noteworthy Masonic occasion.
It took the form of a grand parade comprised of the Mayors and the Corporations of Stockton and Middlesbrough, Clergy, Magistrates, Police, Local and Civic Dignitaries, a band and members of the public. The parade was led by the Earl of Zetland and Freemasons from many Lodges in the area.
After a service in the Church of St. Hilda, Middlesbrough conducted by The Lord Bishop of Ripon, the procession left the Town Hall and walked through the streets to the site of the new hospital. This was a day of great celebration for the people of the town and it must have been a very festive occasion with the band playing’ Rule Britannia’ and other stirring tunes.

The Masons were in full dress regalia as were the Mayors, Police Clergy and other dignitaries.
It was such an important event for the town that tiered platforms were erected on the site to enable as many people as possible to get a good view of the ‘Foundation Stone Laying Ceremony’ which was conducted with full Masonic Ceremony.

The Stone Laying Ceremony was performed by The Earl of Zetland who had strong links with the area and was also Grand Master of The United Grand Lodge of England as well as Provincial Grand Master of The Provincial Grand Lodge of Yorkshire North and East Ridings.
After the ceremony a large number of people had dinner in The Odd Fellows Hall at a cost to them of 6/- per head.
During the eighteenth and nineteenth centuries Lodges still had ‘Operative Masons’ amongst their membership and it was common practice, up and down the country to have prominent Freemasons to lay the foundation stones of buildings.
As happened in Middlesbrough, ceremonies to commemorate such events were great spectacles and gave the people something to celebrate. The participation of the Freemasons in their regalia would have helped to add a sense of pageantry to the occasion.
It should be born in mind that Middlesbrough in 1860 was still developing; it was a bit of a ‘boom town.’ The new road to Stockton had just been opened; people worked six days a week and spectacles such as this gave them a lot of pleasure.